Richmond Memorial Library continually provides access to physical and virtual resources and services that meet the educational, informational and recreational needs of its diverse community in a safe and comfortable environment.

The library is located at 19 Ross St. in Batavia, NY, four houses from the corner of Main St (Rt. 5) and Ross St.  The library is on the left side of the street.

Directions from the Thruway
From Thruway exit 48, make a left at the first light onto Oak St. (Rt 98 S).  At your next light, turn left onto Richmond Avenue.  Richmond Avenue becomes North St. at the next light.  Continue straight on North St. to Ross St.  Turn right onto Ross St.  Follow Ross St.  Library will be located on your right, just before Main St.

A Board of Trustees of 5 to 15 members is elected by the residents of the Batavia City School District to oversee the policies of the library.  Trustees are elected to three-year terms.  The Board of Trustees meets on the second Monday of the month unless otherwise noted, in the Gallery Room of Richmond Memorial Library, or via Zoom as needed during the COVID-19 pandemic. See the library's Events calendar for details.

All meetings begin at 6:30 PM unless otherwise noted.  All meetings are open to the public, with a forum for public comment reserved for the beginning of every meeting.

2022 RML Board Meeting Minutes To Date

May 2022 RML Board Meeting Minutes

2021 RML Board Meeting Minutes To Date

You may email staff as follows:

The Friends of the Richmond Memorial Library exist to support the mission and goals of the library.  We welcome new and sustaining members.  Join Us!  We can never have too many Friends. Join the Friends at the circulation desk anytime the library is open or at the monthly book sale.

Monthly Book Sales:
Always the first Thursday of the month, 9am-7pm.  Book sales are held in the Wilber-Fox Memorial Room on the lower level of the library.  Elevator available.

Friends' Merchandise For Sale:
Two-tone green and white Book Bag are $15.  All merchandise may be purchased at the main desk of the library.

Members Only Preview Sale (Held quarterly on the Wednesday before the regular monthly sale from 5-7 pm):
March 1
May 31  (For June Sale)
September 6
December 6

Donation of Books and Other Materials

The library accepts donations of gently used hardcover and paperback books, but cannot do anything with books in very poor condition. We can also accept DVDs, BluRay, and CDs in good condition.

Before bringing your books for donation, the library asks you to consider:

-Is there significant wear and tear, such as a broken binding, or loose, torn, or missing covers or pages?
-Is there mold or mildew? Books with mold or mildew often smell musty and are discolored or spotted.
-Is there water damage or staining?
-Do the books have a strong odor such as cigarette smoke?

If you answered “yes” to any of the above questions, the library will not be able to make use of your donation.

Other types of materials that are not needed are textbooks and encyclopedias.

Donations are accepted anytime the library is open, Monday – Thursday, 9 am- 9 pm, and Friday and Saturday 9 am – 5 pm. For very large donations (more than 4 boxes at a time) the library asks you to call ahead.

For more information about what happens with donated materials, see our Gift Policy.

About the Library Foundation 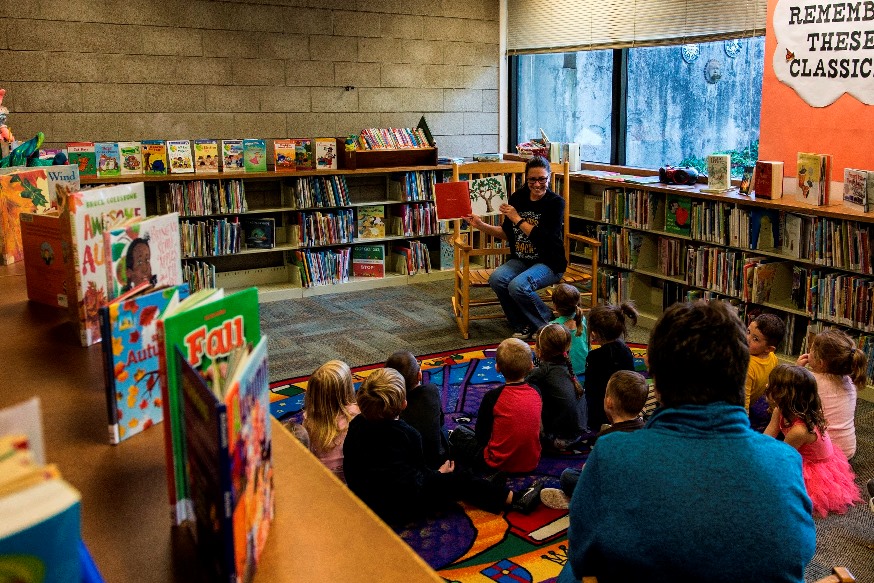 Since 1889, the Richmond Memorial Library has been the cultural heart of Batavia and Genesee County.  For more than a century and a quarter, the library has nurtured the love of books, of learning, of adventure, and of our cultural and literary heritage.  It serves all residents without regard to income or status or background.

With the creation of the Richmond Memorial Library Foundation, we now have a legal entity that can receive your gifts, donations, and bequests and invest them for the future.  You can earmark your gift for specific areas – our collection, the children’s room, special programs, landscaping, bricks and mortar – or you can leave that to the discretion of the library’s director, trustees, and foundation board.

brochure, with numbers showing library use.

For more information on how you can leave a legacy to the Richmond Memorial Library, please contact Robert Conrad, the library’s director, at 585-343-9550, ext. 7; or rconrad@nioga.org.

Your gift will enrich our community.

(These are all in PDF format)